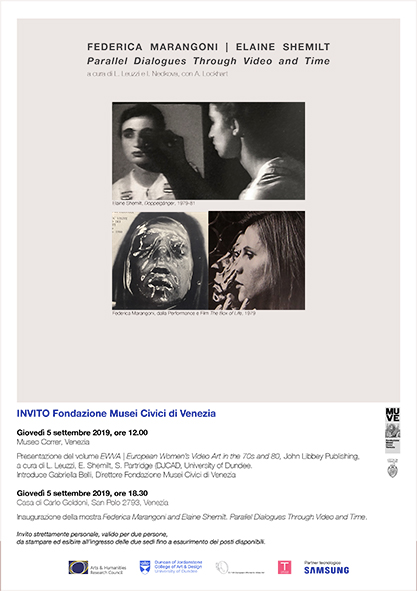 The Fondazione Musei Civici Venezia and the Duncan of Jordanstone College of Art & Design, University of Dundee (Scotland) are honoured to announce the launch of the publication EWVA | European Women’s Video Art in the 70s and 80s, that will take place on September / 5 / 2019, at 12 AM at the Museo Correr, Venice.
The book will be introduced by Gabriella Belli, Director of Fondazione Musei Civici di Venezia and the editors Laura Leuzzi, Elaine Shemilt and Stephen Partridge, at the presence of the artists, curators, academics and journalists.
The volume, published by John Libbey Publishing, is the main output from the eponymous research project funded by the Arts and Humanities Research Council, led by Prof. Elaine Shemilt, that aims to bring under the spotlight the fundamental contribution of women artists to the development of video art in Europe.
Following the publication launch, there will be an exhibition preview at 18.30 in the Court of Casa Goldoni (San Polo 2793) of the accompanying touring exhibition Federica Marangoni and Elaine Shemilt. Parallel Dialogues Through Video and Time. The exhibition stars its tour from Venice’s Court of Casa Goldoni and continues in Scotland during 2020 at Perth’s museum and gallery for contemporary art known as Threshold artspace. The exhibition features a selection of rare, historical video artworks and prints by the two European video pioneers Federica Marangoni and Elaine Shemilt. It is curated by Laura Leuzzi and Iliyana Nedkova with the assistance of Adam Lockhart.
A special thank goes to Doc. Chiara Squarcina, Director of the Museum Casa Goldoni.
The exhibition has been made possible through the support of Duncan of Jordanstone College of Art & Design, University of Dundee; Threshold artspace, Horsecross Arts, Perth and thanks to the technical assistance of Adam Lockhart, Paolo Luca and the Samsung staff.

This exhibition aims to critically engage with the role of the feminist artists as activists, with constant societal and political commitment.

“It was the freedom that we were afforded. Every artist that used video had that, but I would argue that creating moving imagery where a film crew was not required was particularly liberating for women.” Elaine Shemilt

This exhibition explores representations of the woman’s body, its image in society, the woman as artist and the role of women.

Despite the correlation of their artistic approaches during the 1970s and ‘80s, Marangoni and Shemilt had no direct knowledge of each other’s work; while Marangoni pioneered environmentalism in media arts, Shemilt was championing pacifism and recognition of women in the processes of peace-making.

These works demonstrate Shemilt and Marangoni’s ongoing protest of the marginalisation of under-represented and vulnerable people and their belief in the power of the artist to influence.

“Feminist film and video were both dedicated to challenging patriarchal tradition, especially its exploitation of the image of woman in art and in commodity culture. But the way the absolute novelty of the medium affected the encounter between women artists and video comes across strikingly from different accounts of movements across different European countries. In itself, novelty brought liberation: video had no place in the history of art and gave women artists an unprecedented freedom.” Laura Mulvey